Redstone Architects attended the IACP annual conference as an Exhibitor on October 16-18, 2022, in Dallas, TX. 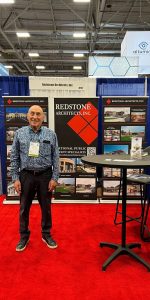 Redstone has been an exhibitor at the IACP annual conferences continuously since 2002, where it meets law enforcement officials from agencies throughout the United States.

By visiting vendors and attending presentations, we keep ourselves updated on the latest trends in law enforcement issues and technology.

The Federal Building and U.S. Courthouse in Port Huron, Michigan is a beautiful example of Renaissance Revival architecture (with Greek Revival influences) that was popular starting in the 1850s.

The oldest courthouse in America still in use today is the King William County Courthouse, which is located near Richmond, Virginia.[1] This courthouse is located on land that was once part of the Powhatan Confederacy, famous for its association with Pocahontas.

Community Rooms: Improving the Relationship Between Law Enforcement and the Community

Although it might seem like law enforcement departments have been around since the very beginning of our country, colonial America had very primitive police forces, if they had them at all.[1] In the early 1700s, big cities like Boston were the most likely to have police, and these police officers usually functioned as night watchmen, to protect the community from drunken violence and to stop prostitution or gambling.

Although everyone understands the obvious danger that fighting fires involves, not all people may realize that firefighters also risk getting cancer or other debilitating diseases from exposure to carcinogens. One case that has brought this issue to the general public’s mind is the controversy over funding for the first responders who were on site during the 9/11 terrorist attacks.

Public Buildings: Are They All Taj Mahal’s?